By request in the comments, I have asked my robot to draw ET. 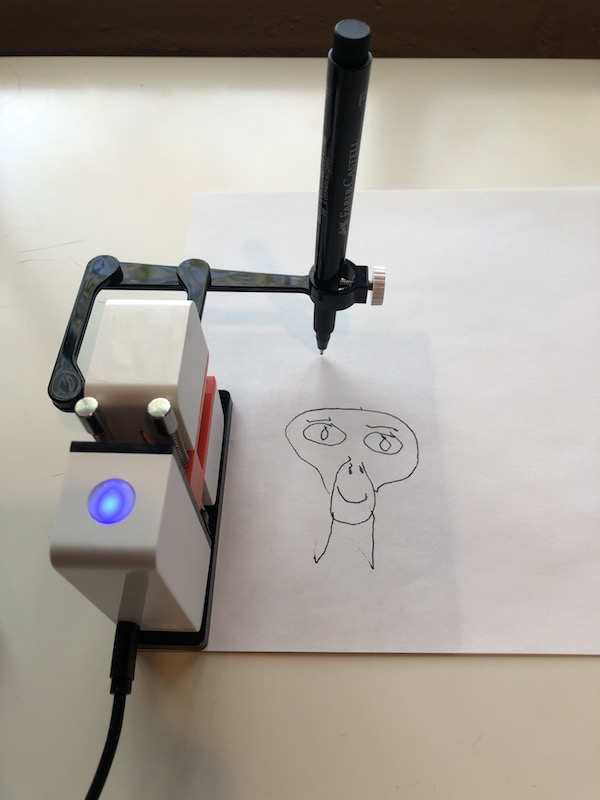 My iPhone is not capable of taking a video of the robot drawing the picture at the same time that it is sending the robot the directions on how to draw the picture.

In other news, I have re-knit the first sleeve of the sweater (now only 1.5 inches too long) and have started on the second sleeve. In further continuation of my suburban existence, I have purchased a leaf-blower and plan to blow leaves this weekend. At work I am still building a data warehouse and have decided that giving our regular server the ability to connect directly to the data warehouse and then writing a dashboard from scratch in JavaScript is easier than using a Business Intelligence tool.

In other other news, I am eagerly awaiting Apple’s release of the new MacBook Pro with the new chip. This blog has been taking longer and longer to build on my laptop from 2013 (the newest computer that I own), so I tried to install newer versions of the blogging software. This led to me having to upgrade all sorts of versions of all sorts of other things. Some of these complained that my compilers are all too old. But the newer versions of the compilers complained that my operating system is too old. And there is no way that I am going to put a 2021 operating system on a 2013 laptop with 4GB of memory and a 128GB drive.

I will note that I was successful at getting old compilers to compile new things, and now the blog builds in only 9 seconds. As anyone who develops software on a Mac knows, nothing else that was ever installed with homebrew works anymore.