I knit a sweater in 10 days. From cast on to bind off, including blocking and weaving in the ends. The whole 900 yards. In 10 days. Sure, it was bulky yarn, but I’m not usually one to actually finish knitting things. And I’m usually pretty terrible at all those fiddly steps at the end to get the darn thing actually finished.

I took this picture on Sunday, before I had finished weaving in the ends. But I promise you that they are woven in; I wore the sweater to work yesterday. The reason the photo is cropped that way is because in order for you to see the texture in the black yarn, there is so much light entering the frame that everything light-colored is completely obliterated due to over-exposure. 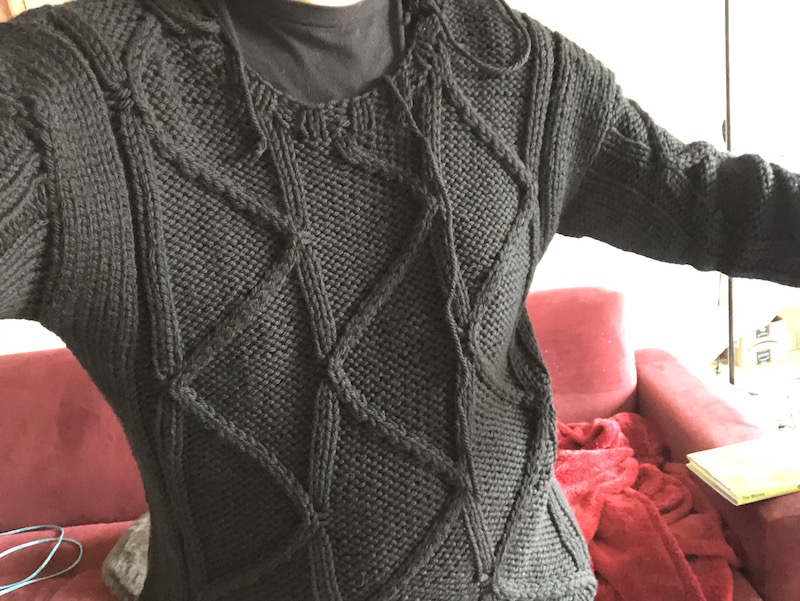 Why did I knit a sweater in 10 days? Well, the other option was heavy drinking, and that really did not fit in with the rest of my plans.

Some stuff changed at work, and now there are a bunch of new rules. I had to add an extra column to one of the database tables so that it was clearer which parts of the information have special restrictions. This sort of change was not really a big deal. It was a little bit stressful, though, because I had to run a query that modified data on the live server.

There are some other new rules, and I am anxious about the way in which they were implemented. For example, we are no longer supposed to go in the door that doesn’t latch correctly because after a zillion warnings for us to check that the door is latched correctly, someone always forgot, and then the door wasn’t actually closed. But some people are still using the door! And that strikes at my sense of fairness. WHY ARE YOU USING THE FORBIDDEN DOOR! IT IS FORBIDDEN! And the front desk staff are now in the position of enforcing the rule about the forbidden door. If I were in charge, I would have also changed the lock on the door because that really would have stopped people from using the forbidden door.

You can see why “knitting a sweater” is a better option than drinking when these are the sorts of concerns that are stressing one out.

I’ve also taken advantage of the coronavirus panic to convince myself to cancel a doctor’s appointment with the extra-specialist. I wasn’t all that keen on seeing the extra-specialist anyway, and now I’m certainly not going to sit in a waiting room of a large medical building with lots of doctors (not just specialists and extra-specialists). I didn’t actually cancel. I rescheduled for his next available, which is in May. He’s a busy guy; I’m sure that they’ll find someone to fill in my spot.

The whole reason that I was seeing the extra-specialist in the first place is that the specialist wants to know more about things that don’t really matter.

Back in December I saw the specialist (note: this is NOT a neurologist), and the conversation unfolded somewhat like this (obviously paraphrased):

Specialist: So how is everything?

Me: Pretty good. I now have a minor symptom, but it’s not bad.

Specialist: There is no reason why you would have that symptom. Some people have that symptom because they have a funny-shaped bone in their heads. We could do a CT-scan to look at the bones in your head!

Me: I have had two CT-scans and three MRIs (one of which you ordered) of my head in the past three years. Can you look at the bone on one of those scans?

Specialist: No, no, no. We need a special scan to look at the bone.

Me: What if it’s not because of the bone?

Specialist: That happens. We don’t know why. In that case we can’t do anything.

Me: What if it is the bone, what would we do?

Specialist: We could do surgery on your head to change the bone. It doesn’t always work.

Me: What if it is the bone and we don’t do anything?

Specialist: You would still have the symptom.

Me: Let’s pass on the CT-scan.

Specialist: But I really, really, really want to know if the bone is responsible for your symptom. I am very curious! If you won’t do the scan, can you talk to my colleague, the extra-specialist, in case he has a good idea why you are having the symptom?

So at the time, I agreed to talk to the extra-specialist because his office is kind of on my way to work, and I had forgotten that my new health insurance is based on people charging me unpredictable and seemingly random amounts of money only loosely connected to medical treatments that I receive.

But now does not seem to be the right time for me to go and sit around a waiting room with a bunch of hypochondriacs with regular colds who will then give me their regular colds and then force me into isolation like some sort of biblical leper until I get over the cold. Not only does this medical building have shared waiting rooms for wildly different types of doctors, but it also pressures you into checking in with a touch-screen kiosk and makes you authenticate yourself with a palm-scanner. Do not need.

And I have not even mentioned the plumbers. They are replacing every single pipe in the entire building. My walls are full of holes. My washing machine and dryer are in my living room because many of these pipe-accessing holes in the wall are in the laundry closet. Seemingly aribitrary parts of my apartment have no running water. For example, my kitchen had no water for three days. This ordeal has lasted almost a week so far and has no signs of ending soon. My cats are currently incarcerated at a pet resort to keep them from setting themselves on fire with the plumbers’ acetylene torches or getting stuck in the walls or whatever cats do during major plumbing projects.